During high school and college, both Rick and Jason worked at local marinas in the Bolton Landing area in the early 1970’s   After earning Bachelor Degrees from Plattsburgh State University, Rick and Jason committed themselves to the marine industry full time, and moved to Ft. Lauderdale Florida, in 1981.  While in Florida, they worked at, and later managed Keith Hazel’s Harbor 1, a marine facility owned by the World Champion throttle man, Keith Hazel. Harbor 1 specialized in Hi-Performance engine work, rigging, and race team support.  Also while in Florida, they started their own marine maintenance company and were awarded a contract with the U.S. Customs Department, maintaining their hi-speed drug intercept boats.  In 1982 Jason Started his offshore racing career driving Bob Sheer’s 30′ Flight Marine Cat “Sheer Terror” and winning the Modified National Championship that year. 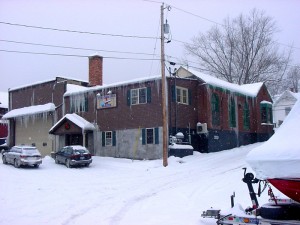 A Lake George Winter - at the shop

In 1987 opportunity knocked.  Jim DeNooyer (of King Sting fame) was developing a marine facility on Lake George in New York and asked Rick and Jason to get involved.  The move to New York was made and Performance Marine was incorporated in 1987.  Since then it has steadily grown and evolved.  While still a close personal friend, Jason and Rick bought out Jim DeNooyer’s business interest in Performance Marine in 1989, and have continued to expand Performance Marine’s services and facilities.  With two vertical mills, lathe, cylinder head machining center, computerized Dynomometer, computerized air fuel ratio equipment, engine development software and hours of factory training,  Performance Marine has become one of the most technologically advanced facilities in the Northeast.  Performance Marine has also attained Mercury and Mercruiser’s “Premier” service status, the highest level of achievement recognized by Mercury Marine.

If you are looking for the highest level of marine service and the best quality marine products available today, join the growing number of people on the Performance Marine Team.